LAS VEGAS – Amanda Lemos made a statement in her second UFC main event.

Standing across from Marina Rodriguez at UFC Fight Night 214, Lemos (13-2-1 MMA, 7-2 UFC) knew the marquee strawweight bout had big implications for a potential title shot in the near future. Rodriguez (16-2-2 MMA, 6-2-2 UFC) entered as a winner of her last four bouts, but Lemos put a halt to her streak with an impressive standing TKO finish in the third round.

Neither fighter rushed the action in the opening round. Lemos controlled the center of the cage as Rodriguez searched for openings on the outside. After exchanging single kicks throughout most of the round, Rodriguez reversed a takedown in the final seconds of a close round.

Strikes flew more frequently early in the second, with Lemos landing a nice counter right hand. A few moments later, Lemos completed a trip takedown, immediately taking the back of Rodriguez. The rear-naked choke submission threat was there momentarily, but was unable to fully lock it in. Lemos controlled from top to close out the round.

In the third, Lemos let her hands go early and stunned Rodriguez with a punch. Noticing her opponent didn’t react naturally, Lemos closed the distance and emptied the tank with punches until referee Jason Herzog pulled her off. Rodriguez never fell to the ground, but her body language as she covered up against the fence indicated she was out of her senses.

The official time of the stoppage was 54 seconds.

Amanda Lemos was FIRED UP for that finish 🔥 #UFCVegas64 pic.twitter.com/q3h31wBiZr

Entering at No. 9 in the USA TODAY Sports/MMA Junkie strawweight rankings, Lemos pulled off the biggest win of her career thus far and has her eyes set on a chance at UFC gold.

“Hey Dana, I’m here already, put me as the backup for the title fight in New York,” Lemos said during her post-fight interview.

The strawweight title is set to be defended next week at UFC 281, where Carla Esparza will look to turn away former champion Zhang Weili. 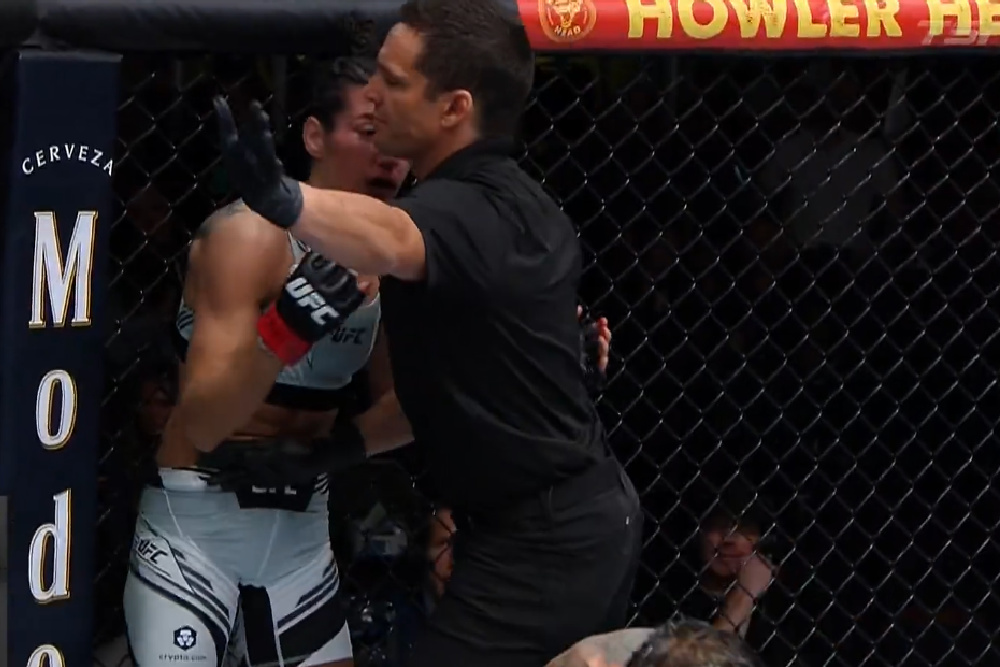